The instant we saw the very first “Meet Ezra” video from Star Wars Rebels, Axel knew he was perfect.

A street smart clever little Loth Rat who doesn’t mind sticking it to the Empire?

As I mentioned before in another costume journey, before the show, before the Spark of Rebellion I was working with very little info…
… basically the above video.

But hey, I know what I’m doing.

It All Starts With References.

So once again I set to work pulling and saving every screenshot I could for info on this character. When all was said and done I had a pretty good idea of what I was doing.

Eventually I’d have a much better shot from the Star Wars Weekends costume that Disney had that year.

It actually looked somewhat simple. Close to an X-Wing flight suit, brown vest, no crazy difficult colors to match. So I began my search.

The Hunt For Materials

Just a reminder I was building this along with Kanan, Sabine, and Hera all before the show even same out so I was in every thrift store and fabric spot around!

Ended up finding some gloves at target that we could alter, an orange jumpsuit from Amazon, thrift store brown boots, and old bicycle pads that could be the armor pieces. Also found a jacket that I could take apart for the vest.

Now I didn’t know this at the time but when building a costume for a kid there are many more things to consider. Kids GROW whatever you build will be temporary, even if you leave room to grow that room runs our faster than you think. Also kids comfort level can be an issue. While adults can strap themselves into full armor for a set number of hours putting a kid in that kind of costume can be not only uncomfortable but also things like going to the bathroom might mean they need help. While Ezra is not particularly armored, he does wear a jumpsuit which means pretty much disrobing every time he needs to use the restroom. Next time he outgrows his stuff I think I’ll forego the jumpsuit and use separate tops and bottoms… or find a jumpsuit with a zipper. Also durability. Kids (ESPECIALLY AXEL) can be energetic and adventurous. On countless troops Axel has climbed trees, chased around with other kids, done stunt rolls and cartwheels, and plenty more. Don’t get mad you gave your kid a $600 helmet that gets broken because chances are, no matter how careful you tell them to be, that helmet will be dropped. Kids are kids, they’re clumsy, forgetful, and get caught up in the moment. You want to keep their costumes in order YOU have to be the one to make sure they don’t forget their gloves, or kneepads, or armor piece. Because they’ll be having fun and decide they want to remove uncomfortable pieces sometimes and color, or play video games, or whatever.

Now back to our regularly scheduled program.

We had already found some cool brown boots at a thrift store that Axel had been using for his Jedi.

We basically just glued on some Orange strips on and they were ready.

I repainted some elbow pads to be the top pieces for both the knee and the shin top piece. But after searching everywhere for the shin I ended up cutting up a dollar store trash can and heat forming it into the shape I needed for the bottom piece. Added some foam pieces for the detail and I went with that!

The Knee was just the other elbow pad painted brown and black.

Wasn’t perfect but it would work for a while.

Once again, thrift store belt with some plastic gold painted details on and a few snaps added worked just fine.

I finally found some green kids fingerless gloves at Target but I they had a camo pattern printed on them. I flipped them inside out and sewed on the triangle piece and boom. Gloves.

I made the whole thing out of foam as a temporary solution. I ended up with no time to really make it out of leather like I had planned. I glued little grey pieces onto a larger brown foam piece that wrapped around his wrist. It wasn’t great but it worked for him for longer than I intended on using it. 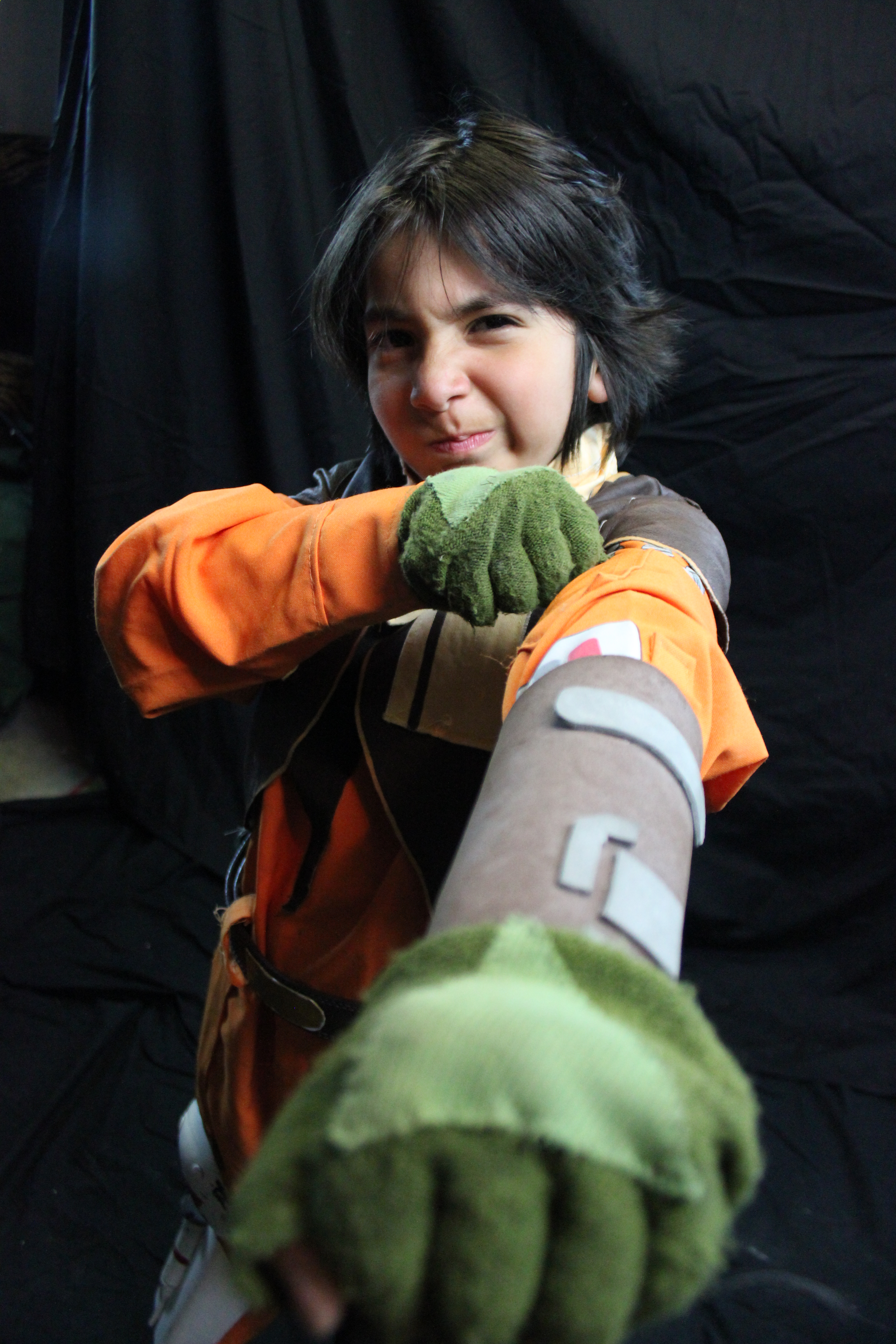 I didn’t know anything about patterns or sewing really or ….

I don’t know but I went for it.

Basically folded the pieces in half and cut them out that way because in my head that made them even….

Luckily it was a pretty simple thing. Back, front, and tiny sleeve things. Then little yellow pieces for the details.

It came out pretty good although I’m pretty sure it could be better.

I would later find out that I was missing one important piece.

In all the references I had Ezra was wearing a backpack, but then I spotted a little LEGO pic of Ezra’s back.

But after seeing that I had to figure out a way to do the design on the back.

I ended up making a stencil and spray painting it on. I thought it came out good, my wife was displeased and cleaned up the edges with brown paint. She also painted on most of the details so it came out pretty nice.

Here’s where things got iffy. Now as a costumer…

I don’t really know how to sew. But I’ve never let that stop me…. it just often really slows me down and I make a lot of mess….

So for the jumpsuit I tried a few things.

First I found that apparently if you are not a baby or a painter it is very difficult to find a jumpsuit for any size in between.

I bought 2 XS white coveralls off of amazon and figured I could dye and alter them to work.

Yeah that did not work out for Ezra. I kinda just made the baggiest bodysuit that just didn’t work….

It kinda looked like an orange wearable sleeping bag.

But I had a backup plan.

Axel had a Karate Gi that I kind of figured I could dye, then flip the top backward so the vest would cover the seam and add the details to the new front. I dyed it, tried it and it kinda worked but you could tell it was crap quality… oh did I say dye? Well that didn’t work so I spray painted it….

It wasn’t horrible but Liz thought we could do better.

She hit a halloween shop for a childs X-Wing flight suit and figured we could alter that to be this. We basically had to change out the legs and paint some brown details on. Then we sewed on our own collar and stuff. It worked out pretty well!

So it wasn’t perfect but he looked good in it! The thing about kids costumes also is that they KEEP GROWING. 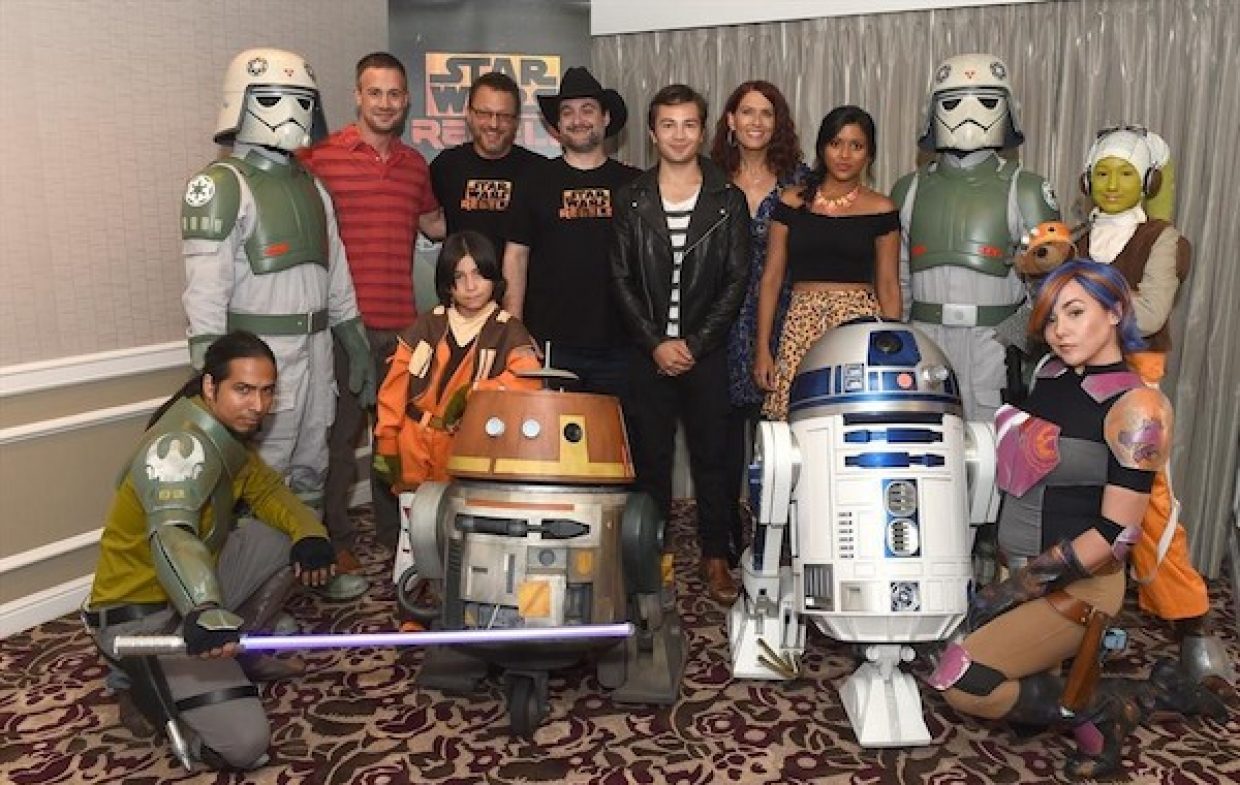 In these pics when we first made the costume it was a bit baggy for him to grow into. But soon we had to do another jumpsuit because all of a sudden he was too big!

You can see that a year later the legs are no longer long enough and keep pulling up over his boots.

We ended up buying the Disney store jumpsuit and using the suit with all of our pieces added on because it was cheap and looked pretty nice.

Also with Axel in particular he is remarkably like Ezra in energy level… He puts his costumes through a lot.

So basically if he wears it once, it’s weathered.

So we had finished on our deadline, had a blast, and made an impression!! 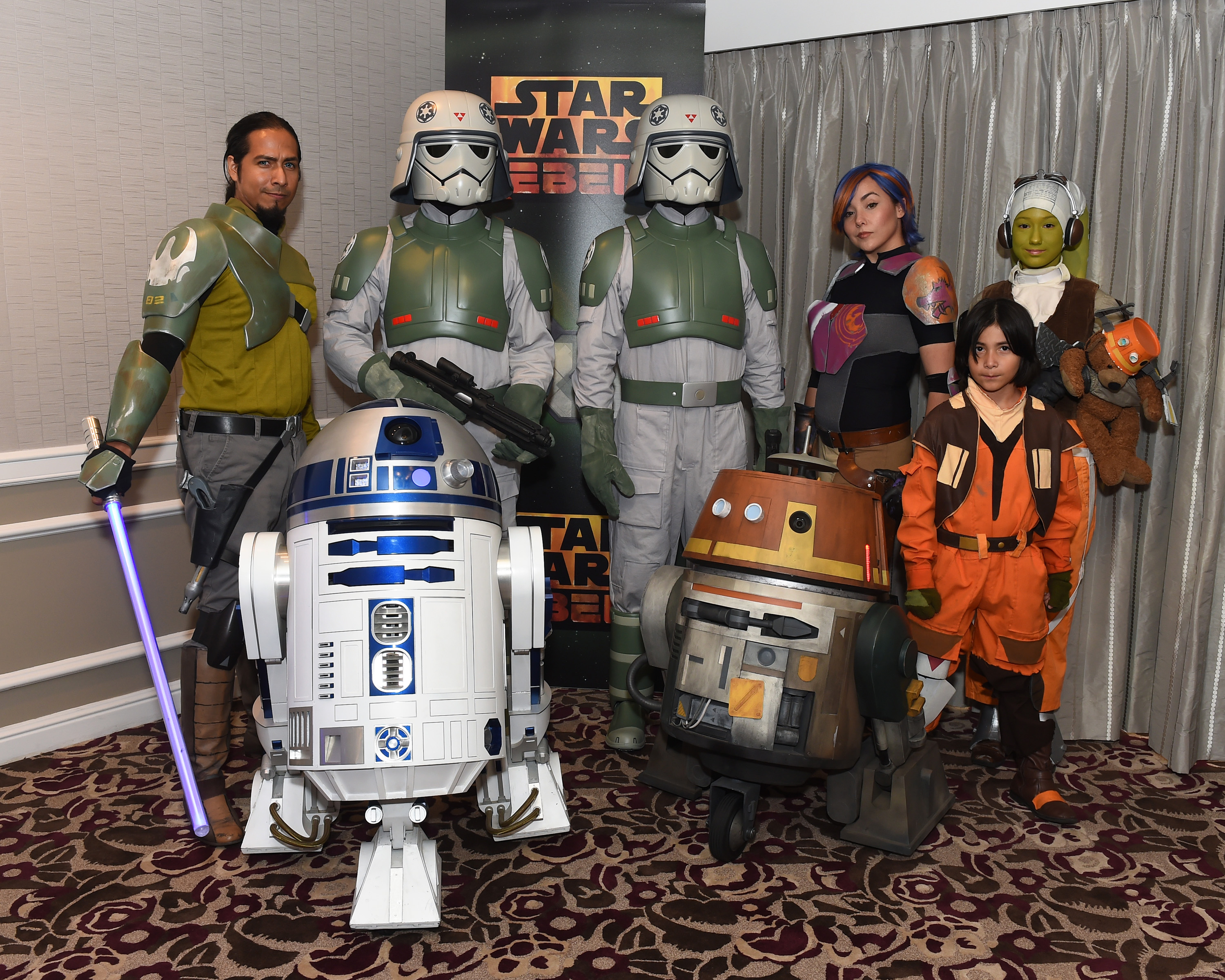 But when you build a costume for a kid, there are not only improvements to make, but battle damage to fix, and outgrowing to deal with!!

Not to mention that soon Ezra himself would make changes as well….

In part 2 I’ll get into making sure this costume keeps up with this Loth Rat!

RogueRebels on twitch in an hour!!
New #RogueRebelsPodcast talking these rad #TheHighRepublicAdventures comics!!
We chat with @vanessamarshall1138 about the return of Chopper and his take no prisoners tactics on The Bad Batch!
Visited @lostbooksla a few weeks ago.
📚⚖️🧑🏻‍⚖️😁
The High Republic Hype continues!!!