“There are things I cannot do.”

When I watched The Phantom Menace for the first time in ’99 I was a happy dude. While it’s easy to imagine how excited I was for triple lightsaber fights and backflips, there was something else I enjoyed. Watching a young queen doing what she must to protect her people. Seeing her make decisions and adapt as her faith in democracy is tested. Witnessing her take up arms herself to join her people in their battle for freedom. There are a lot of reasons that Queen Amidala made an impact on me back then. If you’ve read E.K. Johnston’s previous book Queen’s Shadow, then you already have an idea of how well she is able to write Padmé but in this book we really get to know the Queen.

Which is a good thing.

Right off the bat, I’ll be honest.

The Phantom Menace Padmé is my favorite Padmé. I mean, I know we have a lot more Padmé now than when I decided that was a fact but it still holds up. A fourteen-year-old Queen risking everything for her people. She faces down the senate and confronts their inaction while deciding what she needs to do to protect her planet… which has ramifications for her future self… (see: Queen’s Shadow) A girl a certain senator constantly underestimated who almost ruined his plans and kicked his super-secret scheming into overdrive and contingencies. I love that she is constantly underestimated and makes the most of it.

I like Amidala. The best thing about this book is really getting behind that. Amidala. What she is and how Padmé crafted her. What she means and what she does. I really enjoyed getting into the idea of the fact that she puts on the persona of Amidala when she (or Sabé) become the Queen and this book dives deep into that. Sabé is the coolest.

Seeing her relationship with Padmé from their first meeting is something that I really enjoyed. Sabé finding her place and taking to her work is something that really captured my attention. Like, we all know Sabé as the ultimate homie but watching her becoming that was just CHEF’S KISS.

Now beyond Sabé, watching the handmaiden team come together was like as cool as when The Avengers got together in that one movie that I can’t remember the name of because it’s not Star Wars…

Johnston has these really interesting “interludes” (for lack of a better term) that pop in between some chapters. In this book, they basically introduce us to the girls. I LOVED those. Seeing where they came from and why they were chosen was super mega awesome.

As one of those dudes who admittedly for a good 20 years could only identify Sabé and didn’t know the difference from Saché, Yané, Rabé, and Eirtaé it’s super cool to genuinely get to know them beyond their hooded squad-ness. 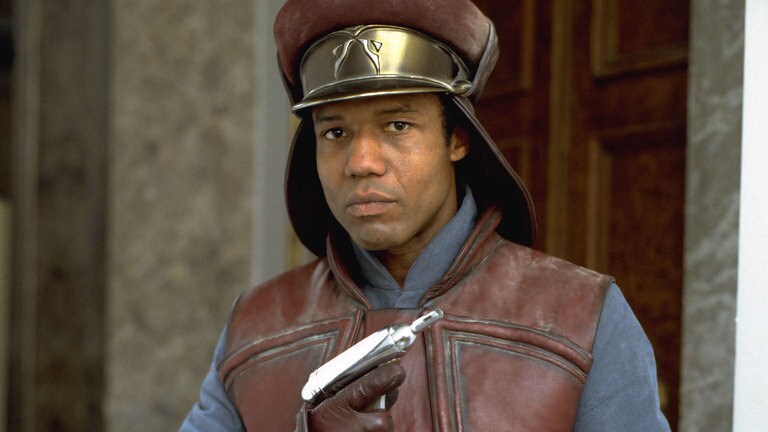 Panaka Did Not Relax

Panaka has long been my favorite dude-who-disagreed-with-Jedi since ’99.

Ever since he gave Qui-Gon mad shade about taking “her royal highness there” and the Hutts being gangsters, he’s always had a special place in my heart.

The book gives glorious context to the face he makes on Tatooine when he sends the Queen’s handmaiden into Mos Espa with Qui-Gon. Watching the Royal Security Captain be constantly tested by the handpicked and highly trained (by him no less) handmaidens makes many scenes in this book extremely enjoyable.

Glorious Day With the Politicians

I mean, it’s a book about a queen so you know there’s got to be politics. But this time the politics are not the usual politics. This time… it’s politics with teenage handmaiden ninja squad scheming. So that makes things infinitely more interesting than the usual “what is Palpatine planning this time” fare.

Except also “What is Palpatine planning this time… again.”

He’s present. In fact, some of this book covers some very familiar territory. The thing I love about seeing familiar events is seeing them through new eyes and this book has that covered. Watching the Occupation of Naboo and the Battle to free it is amazing to see from its inhabitants point of view. Not only Padme of course, but her handmaidens, the Panakas, and even some other Naboo natives. While the book has plenty of new stories to tell, the pieces it tells that are familiar definitely shine with new insight.

… And might make you go back to watching The Phantom Menace glued to watching all the handmaidens expressions in the background like me.

This story has a lot of humor and an entirely different tone than any other. I don’t wanna credit it all up to being basically about teenage ninjas but… here we are. I’m a pretty hardcore Star Wars fan who is pretty good with details if I don’t say so myself, but the names of these handmaidens have eluded me for a while so the fact that I can now identify each and every one of them (besides Sabé of course) should really say something. Once again Johnston handles Padmé’s character wonderfully and really brings a lot of character to everyone in her world. She also puts in lots of details that I loved like the hallikset player, taxation bills, election results, unlikely romances with the local nobility, the queen bee’s sting, the apprentice in the dark, podracing crash, teenagers and concerts, ALL THE BIBBLE, Jar Jar and the worst day ever, carbon scoring, the little boy and the angel, Shmi, and the girl in the white dress.

For fans of Padmé, this is definitely a must-read. For anyone serious about the antics and scheming that a group of teenagers can get into, also a must-read. As a father, a few things struck VERY close to home. For anyone else who’s looking to see the galaxy through some fairly unique eyes, I would definitely recommend this.

“My hands are yours.”