So my journey with Kanan has been long. But as the characters face their trials so must I.

And sometimes moving forward means learning to see things differently and starting over. So here we go.

So once again I pulled from everything available for Kanan’s new look. 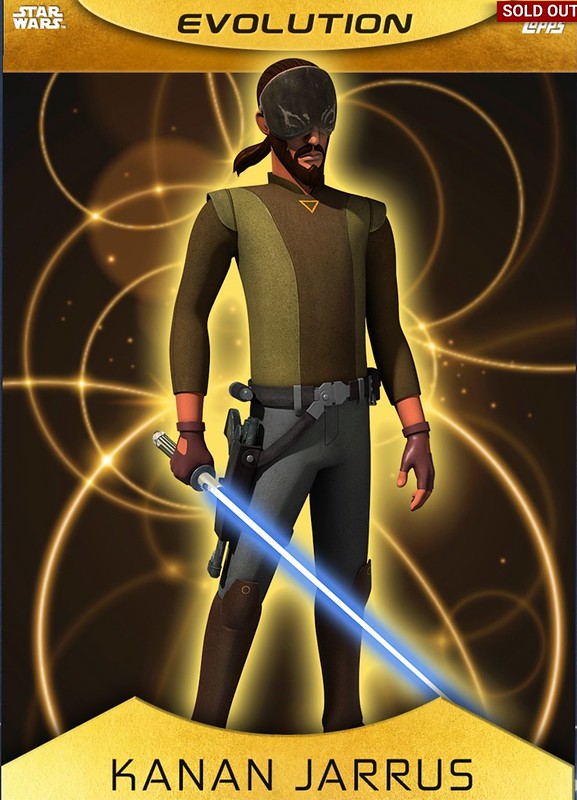 Luckily it wasn’t a completely new look. I’d be able to salvage a few of my other Kanan pieces and use them for this.

But there was a brand new challenge with this costume.

Kanan is blind and wears an opaque face mask over his eyes using the Force to function without sight. I KNEW I wanted to do this. Unfortunately, I am quite used to using my sight to make my way through the galaxy so I’d have to figure out a solution.

All things I could use from my Season 1 and 2 Kanan costume.

Not too long of a list…. but I’ve seen my sewing skills before and was worried about that shirt. Also, I started brainstorming about that mask.

I figured I’d see what I could find at some thrift stores and maybe alter. I thought maybe I could find a brown shirt and sew the green panels on or vice versa. After searching far and wide I didn’t find anything that would work so I guess it was time to figure out sewing again. I searched and bought some brown and green fabric. While at Joanne’s I came across some perfect color maroon gloves for $1. I grabbed em up and figured they’d work until I made my own or found something better. I came upon some perfect boots at Kohls on sale for $40!! SCORE!! I was working on the season 3 versions of all the costumes so shin armor was all I was searching for everywhere. I was able to scrounge/trade/scavenge up some Kanan season 1 knees, shoretrooper shins, and a clear plastic face shield. It was time to get to work.

While I sometimes am able to find very cheap boots at Shoe City and stretching out the largest women’s shoe I can…. it still hurts my feet. I’ve been trying to find a better men’s boot at a reasonable price with much better quality and fit. I was super lucky to find the perfect boots on sale at Kohls! 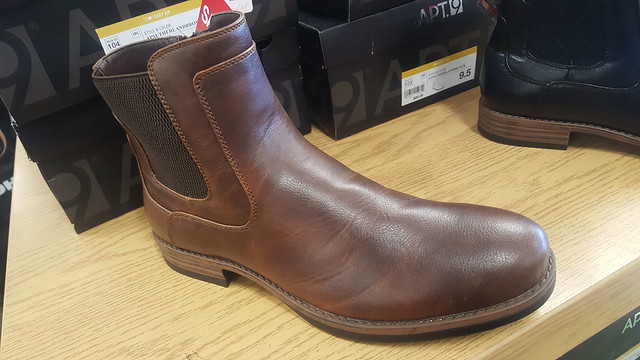 Now Kanan has not only the armored shins but a small piece of armor atop the instep of each boot. I had done it before with Hera and Sabine but with the placement of the armor I didn’t like the idea of the armor shifting or popping off during a fight or cool pose as I intended this costume to be a fully functional Saber Guild costume! A friend of mine had customized his Sith boots by gluing on pieces of leather. It gives the solid look and lines of armor and design but moves and flexes like leather!! So I prepped the boot and cut and dyed my armor pieces and BAM. Contact cement. 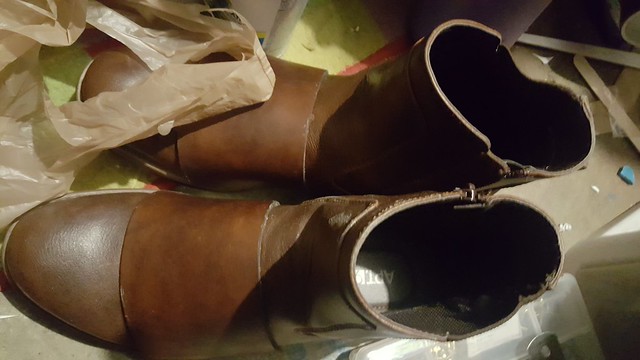 I modified my found pieces into the Kanan shins with a lot of cutting, sanding, zap a gap, and bondo. Then some paint and weathering and my armor is good to go! 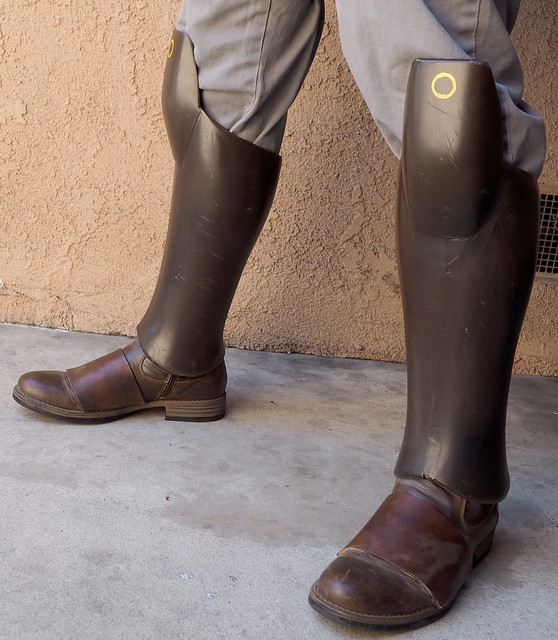 I’m never that excited to sew but I also can’t run to pay and wait on much more skilled help. The shirt looked fairly straightforward and about as simple as I could hope for…. and I figured after doing Ezra’s I might be able to pull it off. So I grabbed a shirt that I thought had the perfect fit and made my pattern from it. I basically made a brown sleeveless shirt and then added the details which was NOT the smart way to go. But it’s okay, I would learn eventually. After finishing the main shirt body it turned out the brown material was just too thin and didn’t work with the green material when I stitched them together… or at least I couldn’t make it work. So I made a second run to Joann’s coupons in hand and found a thicker material that would work much easier. THIS time I tested on a few scraps before patterning and stitching… see? I told you I could learn! After taking it slow and carefully (and this time stitching the details together to the front and back first) I had a shirt! 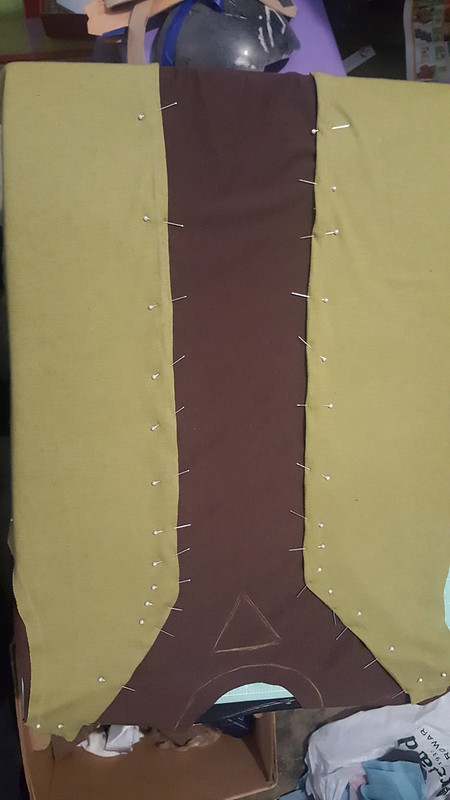 I actually did it! 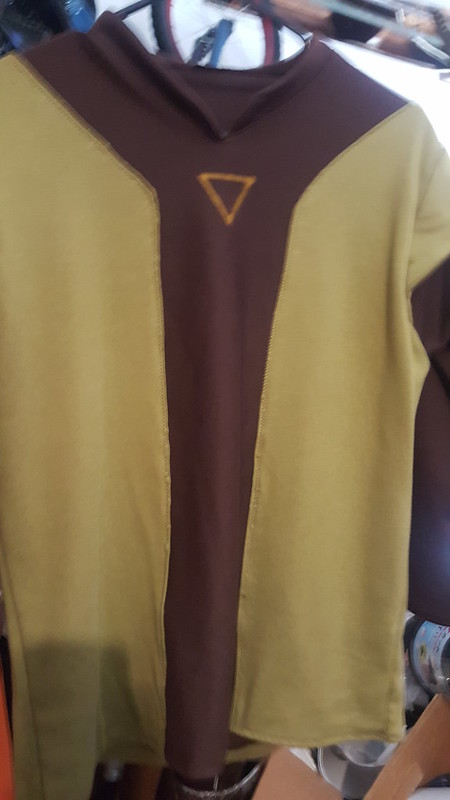 So I had an idea. If I made the mask out of something like a visor of some sort and then painted it to LOOK opaque I could see out of it but no one else could see in. Kind of like those windshield wraps on cars? Maybe?

I ended up with a clear plastic lens that I cut into the proper shape. 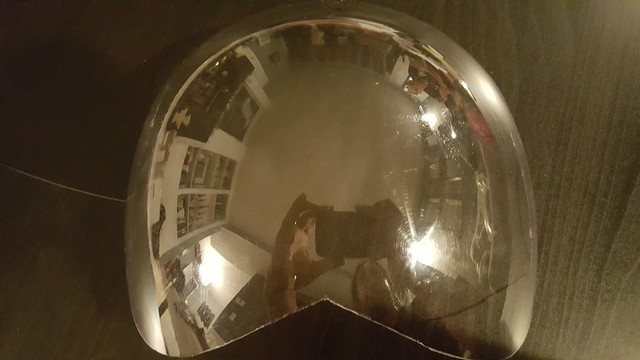 With some idye I carefully dyed it (melting a few test pieces in the process) to be tinted like sunglasses. I had heard of a lot of the rebel pilots using this technique to dye their visors on their helmet orange or yellow. It worked. 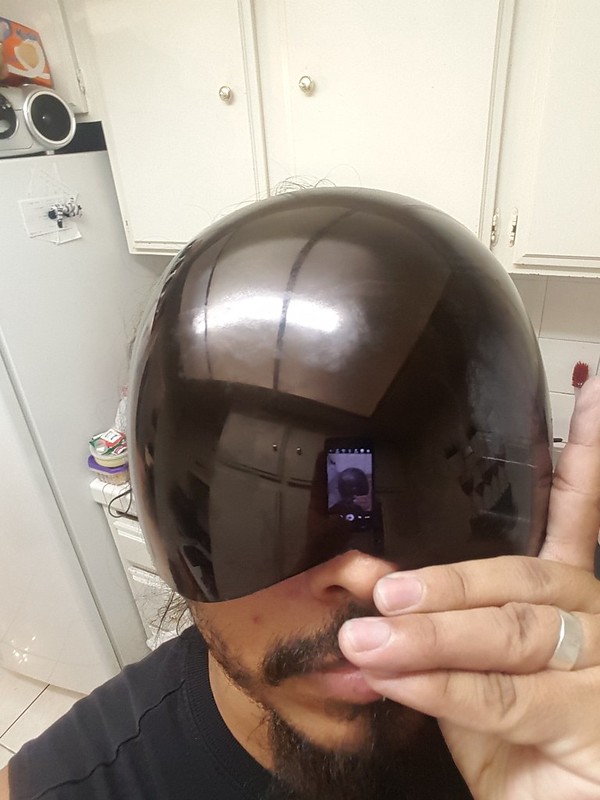 After that it was time to paint. Using a combination of misting, toothbrush splattering, and careful weathering I made sure that while the paint job adds the flat dimension to the look of the visor I could still see out of it. 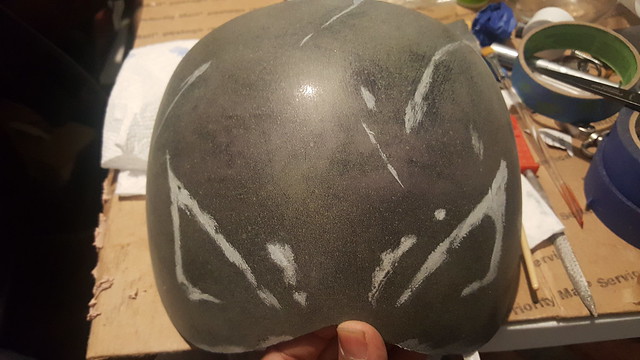 After that I patterned the “frame” part of the visor with leather. I figured the closest spirit of model that I could think of was Captain America’s mask/helmet from the First Avenger movie. It had a kind of leather looking liner that I figured the brown piece of this mask was kind of like. So I made it, assembled it and finished it.

Now the mask was done but I wanted an attachment method that wasn’t a crappy looking strap. I built onto the upper corners some hairclips that sort of clipped onto my dreads and held pretty well. Now I had a mask that I could see in, that attached to my face without any visible method, AND I could use to fight in for Saber Guild shows!!

It all came together just in time for the season 3 finale! After a few nitpicky fixes, I was also able to get the costume official in both Rebel Legion and Saber Guild!

Not only that but I have since performed a few shows in the costume and although I have to be a bit careful not to whip my head around too fast I am able to fight and see fairly easily!! 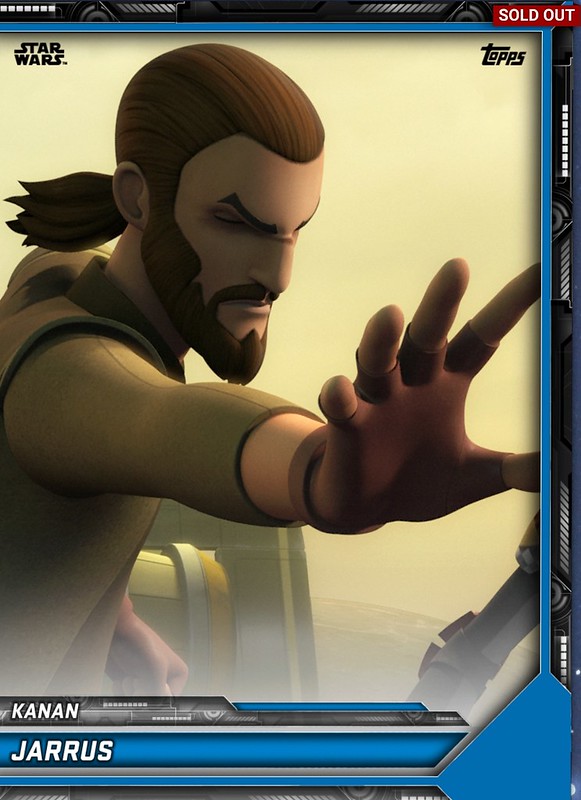 As season 4 approaches and all paths are coming together I can’t wait to see what’s coming for our team, our crew, and in an interesting way, my family.

There’s future for us, one where we’re all free, but it’s up to us to make it happen.