“You must join me Obi-Wan, and together we will destroy the Sith!”

Some of the most mysterious and elusive characters in Star Wars are the Sith. In the canon, there are really only a handful of them and only a couple of them that have a defined and detailed story. Anakin Skywalker is one Sith whose story is very fleshed out, and Maul (although initially his story was uh… cut short) now has a lot more of his story brought to light. The rest of the Sith characters are mostly a mystery. Including Count Dooku.

This story brings a lot of Dooku’s story to light. Which is a wonderful insight into such an important character in the Skywalker Saga that we know so little about.

But Dooku is not the only main character of this story. One of my personal favorite characters Asajj Ventress is the fulcrum around which this story is told. Although we know a bit more about Ventress and her history than her mysterious master, this story brings a bit of light into the early days of her apprenticeship with Dooku.

This is not exactly an audiobook. It’s an “Audio Original” story narrated by a full cast! This gives us something pretty different from the usual audiobook experience. There are lots of pros and cons to something like this. Starting with the cons a few things were tough to get used to. The way the story is told is not as descriptive as a book usually is. In a book, there is usually a lot of description on the page to paint the picture for your mind’s eye. As this story was written for this format, it depends heavily on the audio effects and dialogue to paint that picture for us. It’s not that this is a bad thing in itself but it definitely makes things easy to lose place without an easy text to follow. Not only that but this particular story jumps around a bit which in general also can be confusing if you miss something. The performances themselves are all well done. As usual, the people who put these things together do well at gathering an immense amount of talent. It’s always a bit sad for me when characters we’ve come to connect with for so long are voiced by a different person than we are used to but that is simply the reality of the business I suppose and something I try not to hold against the next person to inherit the shoes. In this case, most of the voices were wonderful but the two main characters are particularly important. Asajj Ventress was voiced very well and performed admirably although a bit differently than The Clone Wars performance I am used to. Dooku was a bit too different for my tastes. In Christopher Lee and Corey Burton, there is such a distinctive and resonant tone to his voice that anything different just seems off. While this voice actor was wonderful in his performance and accent, the voice just didn’t have the same resonance I always think of when I think of Dooku. Where most of the characters slipped right into their place in my head, every time I heard Dooku I would slip out of the story a bit and wonder who it was before remembering that it was Dooku. As for the pros, there are plenty. As always the audio track is packed with more than voices. All the music and sound effects are masterfully mixed into the story. Since this story was written for this medium, it’s able to really take advantage of its strengths and delivers on the audio experience in a unique way. The story and content not only fill in a lot of gaps in our knowledge of Dooku in particular but tell a compelling story through Ventress and her experiences. In her quest for knowledge, we learn much as well.

Ventress is one of my personal favorite characters. While the story takes place long before the Clone Wars it shows us a bit of Ventress in the early days of her apprenticeship under Dooku. She is still battling with the echoes of her former Jedi life. She is still full of anger and rage at what she has endured throughout her life of loss. It never ceases to amaze me how a simple two-dimensional character introduced the Legends material would be given such a deep and rich story in the canon material. She is a shining example of how different media and creators can take such care and bring such life to a character.

Powerful You Have Become

Dooku has had many adventures all centering around being the leader of the Separatists and the Sith Lord Darth Tyranus. The rest of Dooku’s story has been small fragments. Political idealist. Former Jedi. Yoda’s Padawan. Qui-Gon’s master. Count of Serreno. This story fills in much of the pieces. As Ventress follows the path her master’s story weaves we watch Dooku’s story unfold. We learn of his days as a youngling at the Jedi Temple on Coruscant. We follow as he learns of his own birthright. Many of the instrumental choices that lead Dooku to the path we find him on when we meet him in Attack of the Clones are revealed. And like many of our heroes, his intentions are good but eventually push him into a bad place where there is no turning back. This is definitely the most of Dooku’s former life that we have gotten so far and probably will be for a while. Although we got some interesting insights into Dooku in Master and Apprentice this is still much more enlightening. 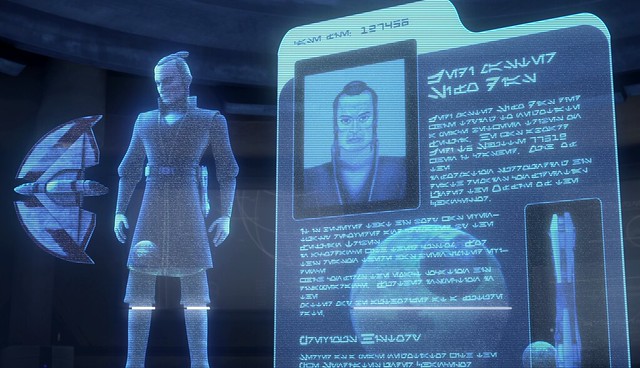 Jedi Master Sifo-Dyas has been an intriguing mystery since his mention in Attack of the Clones as the one who commissioned the Grand Clone Army of the Republic. We learn much of Sifo and Dookus relationship. Their friendship becomes very strong as they grow up together in the Jedi Temple. Much more context is given to Dooku’s dialogue in The Clone Wars episode The Lost One. Including Dooku and Sifo’s interest in the ancient prophecies. And beyond that the ancient Jedi Prophets and the dangers of seeking the future. Some of this knowledge is perhaps a piece of what leads into some of the Dooku insights found in Master and Apprentice.

Ten Points to the Hawkbat Clan

Dooku and Sifo both grow and learn in the Jedi Temple on Coruscant which we have seen plenty of before but now we get an idea of school life there. I’m not the first one to say it definitely gave me a lot of Harry Potter vibes. Gifted younglings, masters selecting apprentices, hidden relic rooms and so on. The Jedi Council is some parts familiar and some parts new to us. Familiar faces like Yoda and Tera Sinube. New faces like Yula Braylon and Lene Kostana. The idea of a young Dooku sneaking around the temple and getting into mischief is something I didn’t know I needed. Nods to things we’ve seen in other stories like the hidden Sith relics in the temple. It’s interesting to find out that Dooku was somewhat of a strong Jedi youngling, in fact, some believed him to be chosen by the Force itself. We are familiar with Jedi and their swashbuckling adventures throughout the galaxy but I enjoyed learning a lot more about their lives growing up in the temple.

For those interested in Dooku’s origins, we learn much about not only the planet he came from but his family and royal lineage. We know him as the Count of Serenno but we learn about his family and how he discovered his lineage. These are pieces of Dooku’s story that are integral to the person we know he becomes, and the lengths he is willing to go. It’s also interesting to find out that his homeworld was once a Sith stronghold.

Dooku and his reputation are given much explanation. His thoughts on the Jedi and their failings, his experiences with the council, even his relationship with his unique padawans are given some more context. While we know eventually Dooku becomes a former Jedi and a leader of the Confederation of Independent Systems it’s clear the decisions that led him there were not sudden and out of character, but an eventual path that Dooku’s differences and ideas could lead to.

More things that were lost that I found interesting were sprinkled throughout this story. Recent mentions like Pijal and Rael Aveross. The Nightsisters, Hal’Sted and Rattataka. Pet convors, and duels with Ky Narec. Visions and the Bogan Collection. A mysterious helmet that belonged Lord Momin. Shifting Sands and the Windrunner. Yoda’s training and lessons in patience. Jedi Seekers and the search for ancient Sith relics. Visions of the future and Sifo-Dyas. Sith Beasts and noble blood.

If you are a Dooku fan this is what you’ve been waiting for. While many questions remain in Dooku’s story, we have a much better idea of the kind of Jedi he was before falling to the Sith. He was able to see the failings of the Jedi and the Republic long before their twilight. It’s a shame he wasn’t able to stop it.

“The Republic is changing Yoda, has changed. We all know it. Even if we won’t admit it.”