The pilot and leader of the Ghost crew Hera Syndulla.

As the story goes this costume first fell to Lizzy. When we were building this costume we basically only had this.

So with basically one reference point, we put together our plans.

We started just a bit lucky. We already had a set of lekku for Liz’s Aayla Secura costume.

It was a simple matter of cleaning them and repainting them green for Hera. Which led us to our next item.

We had always used Reel Creations which has always worked great but is very expensive. We had tried the cheaper Ben Nye alternative but it was too messy and simply didn’t stay on. I did a quick search to see if there was anything close by or cheaper that might work and I found Endura. Another alcohol based body paint that was available both closer and cheaper. I thought I’d buy a small bit and see how it worked (They use it on Face Off so it’s gotta be good right?) Luckily for us it worked great. It’s better than Reel Creations in some things but worse in a few others. But for the price, it’s really the only quality option that I could find. 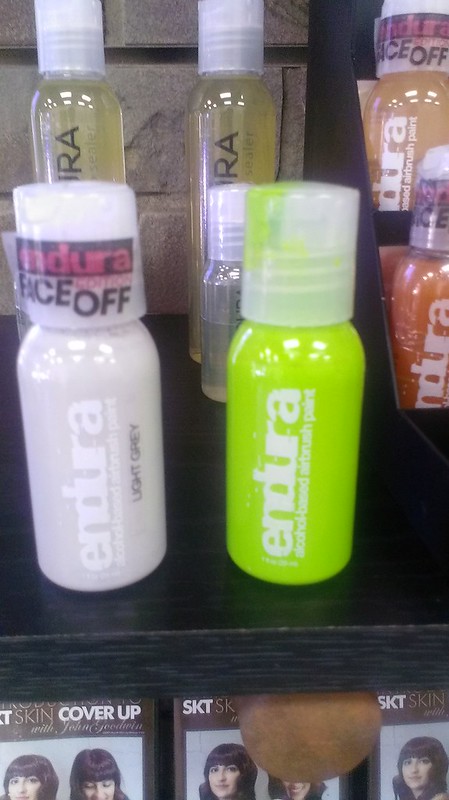 We were going to use the same boots Lizzy used for her Jedi since they were brown. Once again the overalls were going to be a pain. We ended up finding some white coveralls that we got off Amazon.

After that it was time for another thrift store trip. I ended up with a puffy sleeved grey shirt, a white turtleneck, white tights, and a brown jacket. Unfortunately, I have very few pictures from then.

Sorry but you’ll have to believe me.

As for the headset I bought a pair of headphones with a good shape and searched everywhere for goggles and bought those too. Grey webbing would work for the straps. Hit up an army surplus and found some gloves that would work.

We were as ready as we were going to be.

So first things first we cleaned the blue off the lekku and repainted them green. Liz took some white and drew painted on the circle details. Boom. Lekku done. Next.

I took the white tights and cut the legs off and put them on the lekku like shorts! I then drew on the line details and Hera had her white headpiece.

The suit was made by tearing apart the coveralls, white turtleneck, and brown jacket and putting them all together with a few extra flaps and buttons until I had it looking pretty close. My sewing skills were not as good as they are now… And they’re still not very much better.

Found some old elbow pads and painted them up for shoulder armor.

Made the flight straps from some webbing and boom.

We had our first Hera. It wasn’t perfect, but it was pretty good.

After some wonderful and memorable events with this costume…

… AND after actually watching a few episodes it became clear that Lizzy and Liz should switch roles in our little Ghost crew.

So we were pretty much back to square one…

But this time, I would make a few changes…