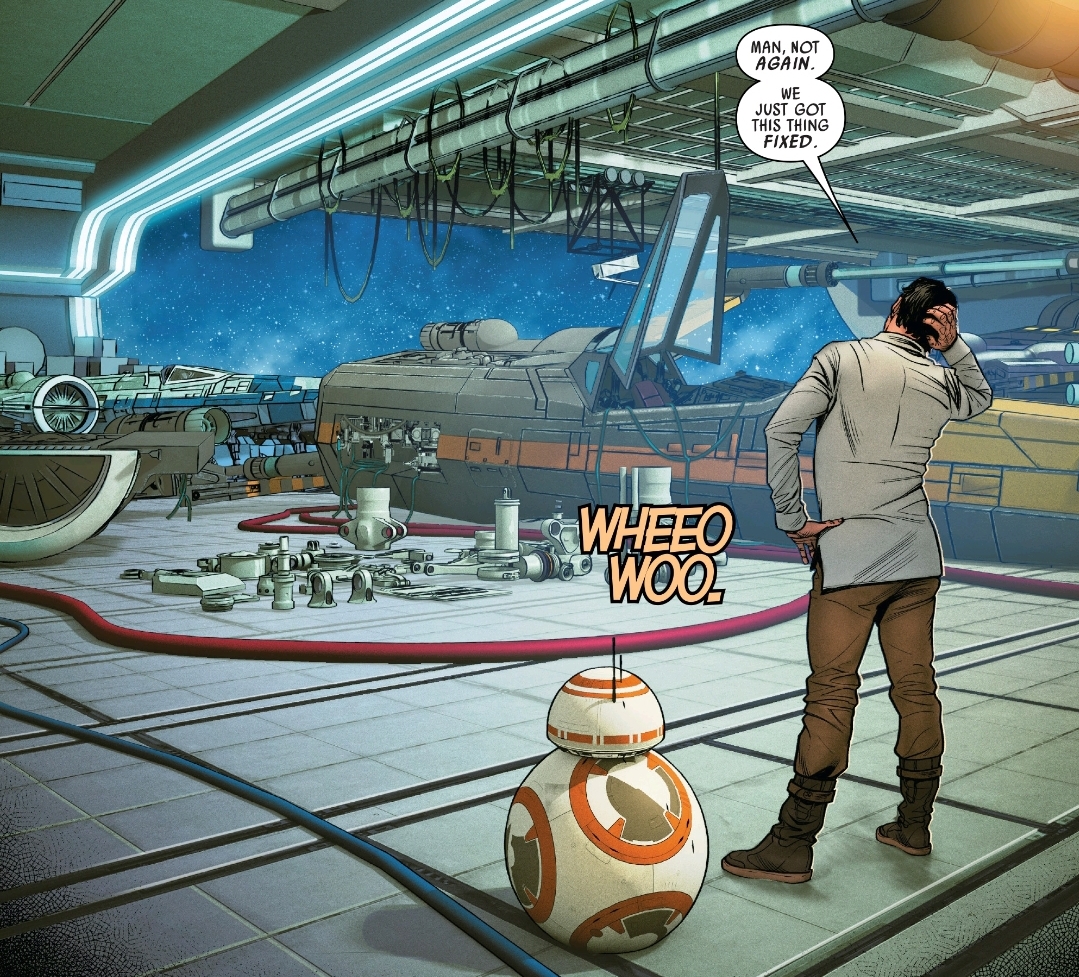 Throughout this comic series, it’s almost a running gag that Poe just can’t seem to keep his T-70 in one piece. If you’ve followed the comic series then you’ve seen plenty of X-Wing damage and if you think ahead to The Last Jedi it’s not looking any easier for poor old Poe.

Another Resistance era story with some surprise B-2 battle droids! While it makes a lot more sense that there are probably a whole lot still in use on Cato Neimoidia, it’s still nice to see them all well taken care of and painted up nice and pretty.

She Knows Her Ships

So Jess Pava is apparently a “one-woman databank” on ships? Does that basically mean she’s the canon version of Admiral Nick?

IN. JUST. THIS. SHOT. pic.twitter.com/oqSDTxJBGz 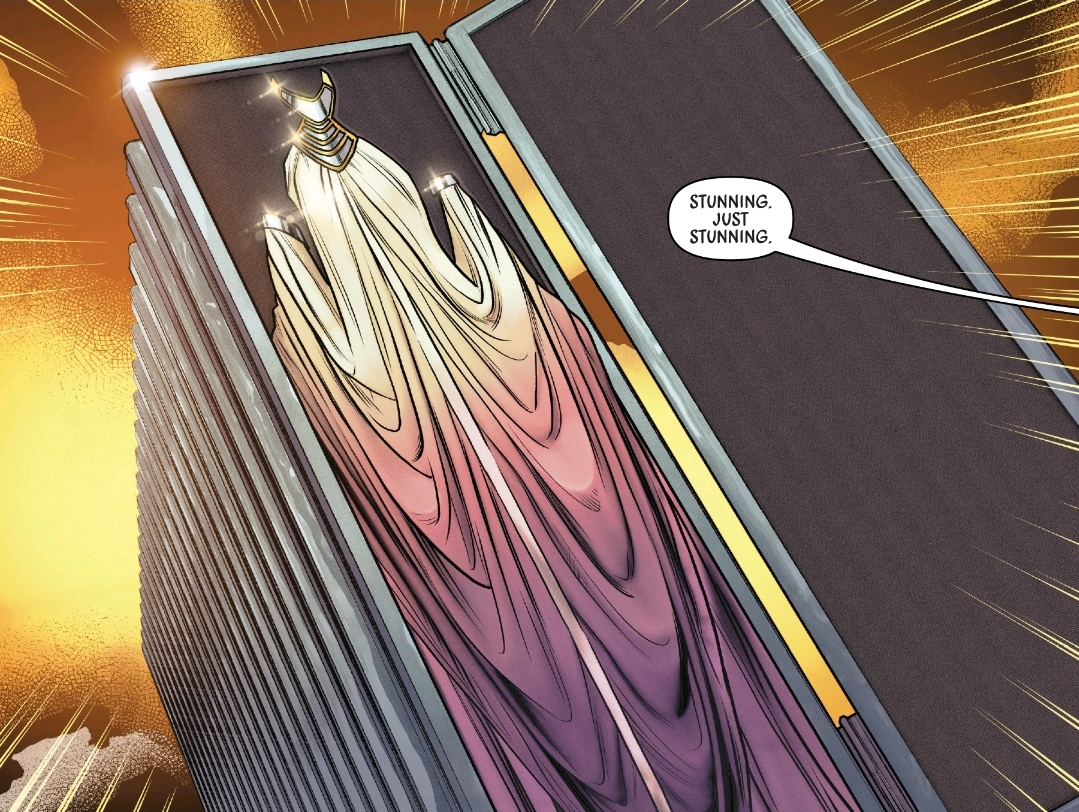 Leia Organa using her royal lineage and toting around the legendary wardrobe of Padme Amidala herself is great. I LOVED the way Leia plays a royal role. We are so used to her being the inspiring, tough as nails, determined leader, that it’s great to see her persona switched up on some hapless Nemoidians! 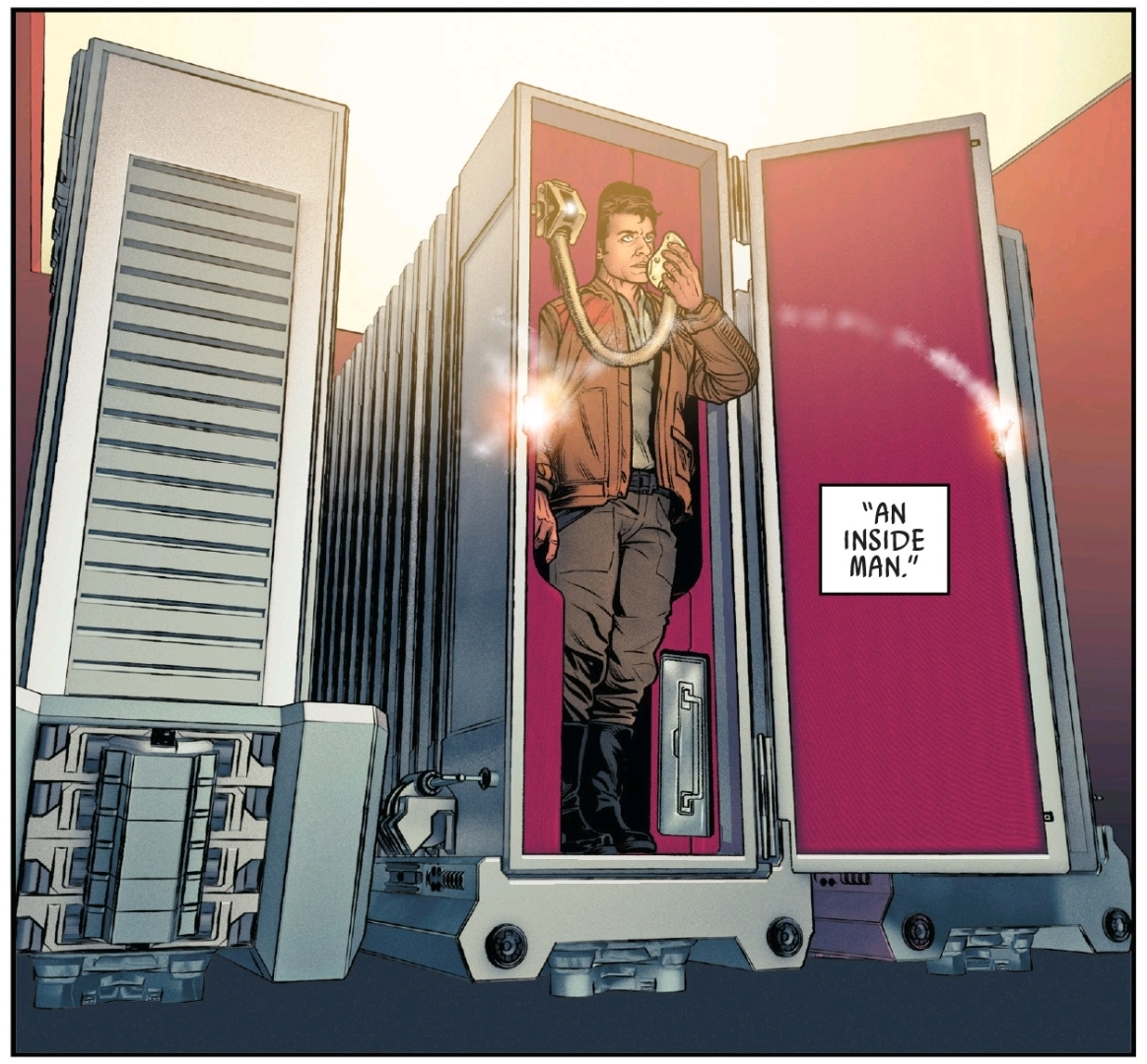 So the story is a prison break. And Poe sneaking in with the luggage is a pretty good piece of the puzzle.

For all the fans of Delilah Dawson’s Star Wars: Phasma, it’s nice to see the Absolution. Who knows, maybe somewhere on board there is a certain caped captain training the future of the First Order…

A few arcs back Agent Terex revealed his super cool pirate former Imperial stormtrooper custom samurai look. It’s been a minute but he wastes no time in crafting some new custom pieces as soon as he has the chance! 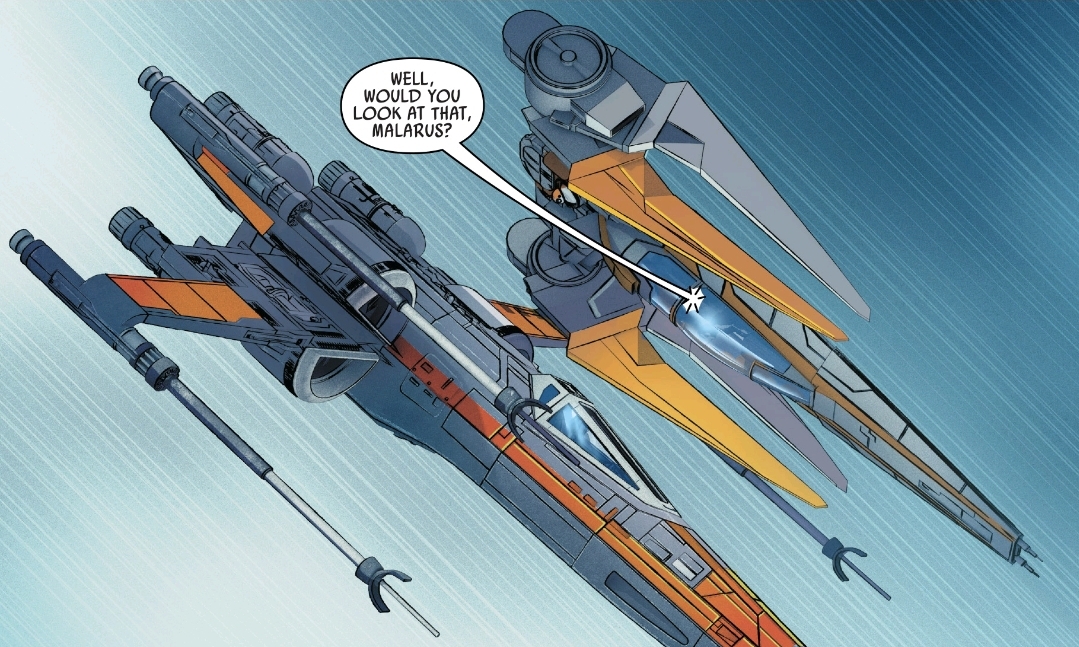 At one point Poe and BB-8 end up pulling another sweet switcheroo with some precision flying upside down nose to nose techniques!

If you’ve ever read the Legends X-Wing series by Stackpole and Allston you might remember some of their precision astromech utilizing proton torpedo shield overloading squadron moves. Poe seems to have learned a thing or two as well and uses a similar move to get a shot in past the First Order shields! 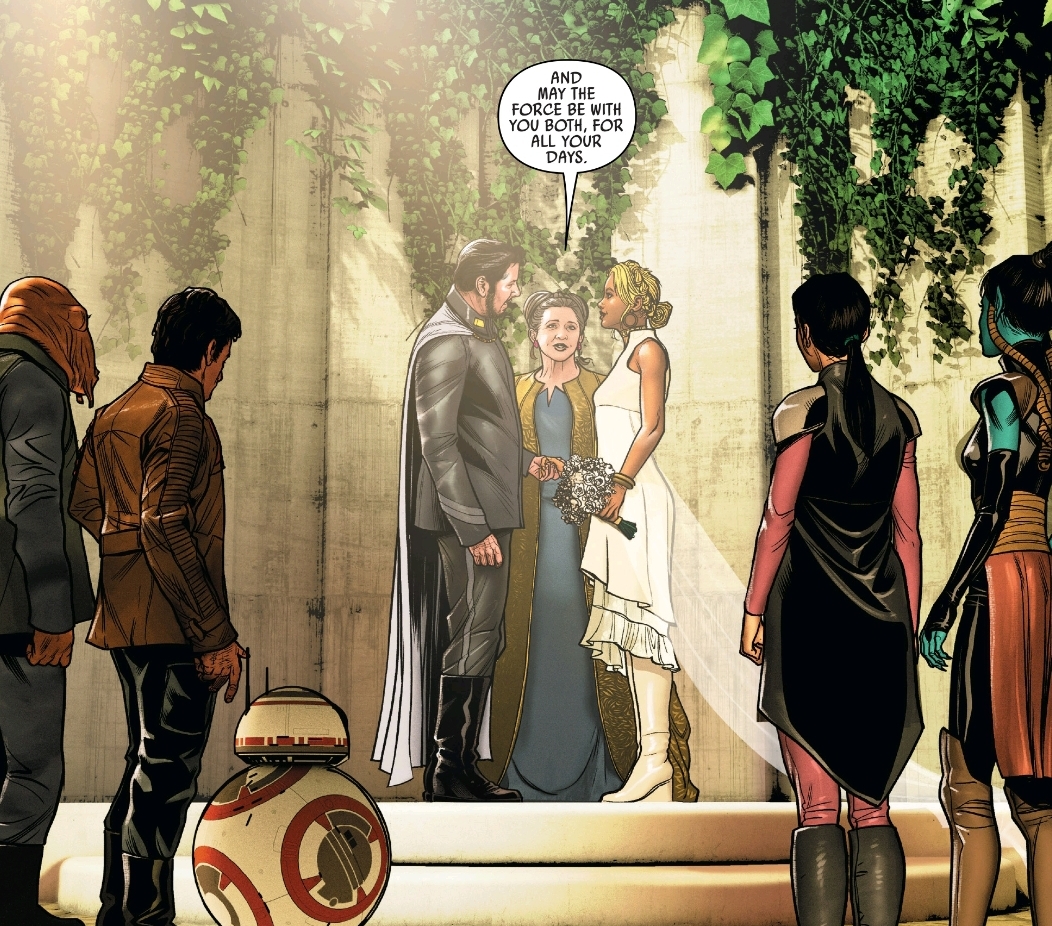 There’s a sweet wedding scene for a Snap and Karé here. The art is pretty, Snap has a very nice Bail Organa type suit and the art sets the scene perfectly. It’s nice to know there was a wedding on D’qar before the Resistance ducked out of there. Oh, and if I have the chance I would also have Leia officiate. 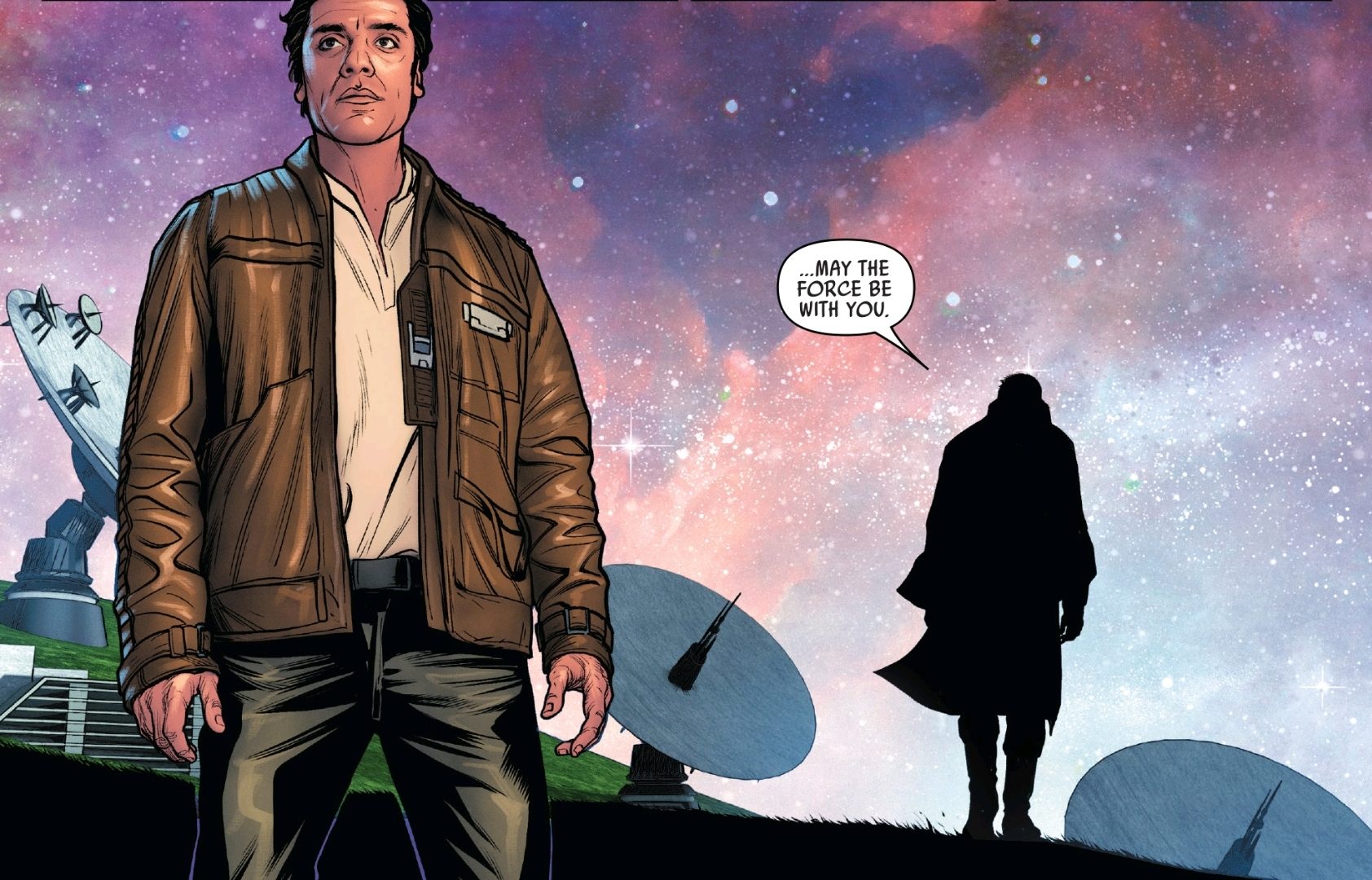 This Will Begin to Make Things Right

With the end of this arc, the series completes its pre-The Force Awakens timeline and the next few arc follows the events of The Last Jedi. Lor San Tekka is a wonderful presence and there are some very nice panels that feel right at home in Poe Dameron’s bigger character arc. 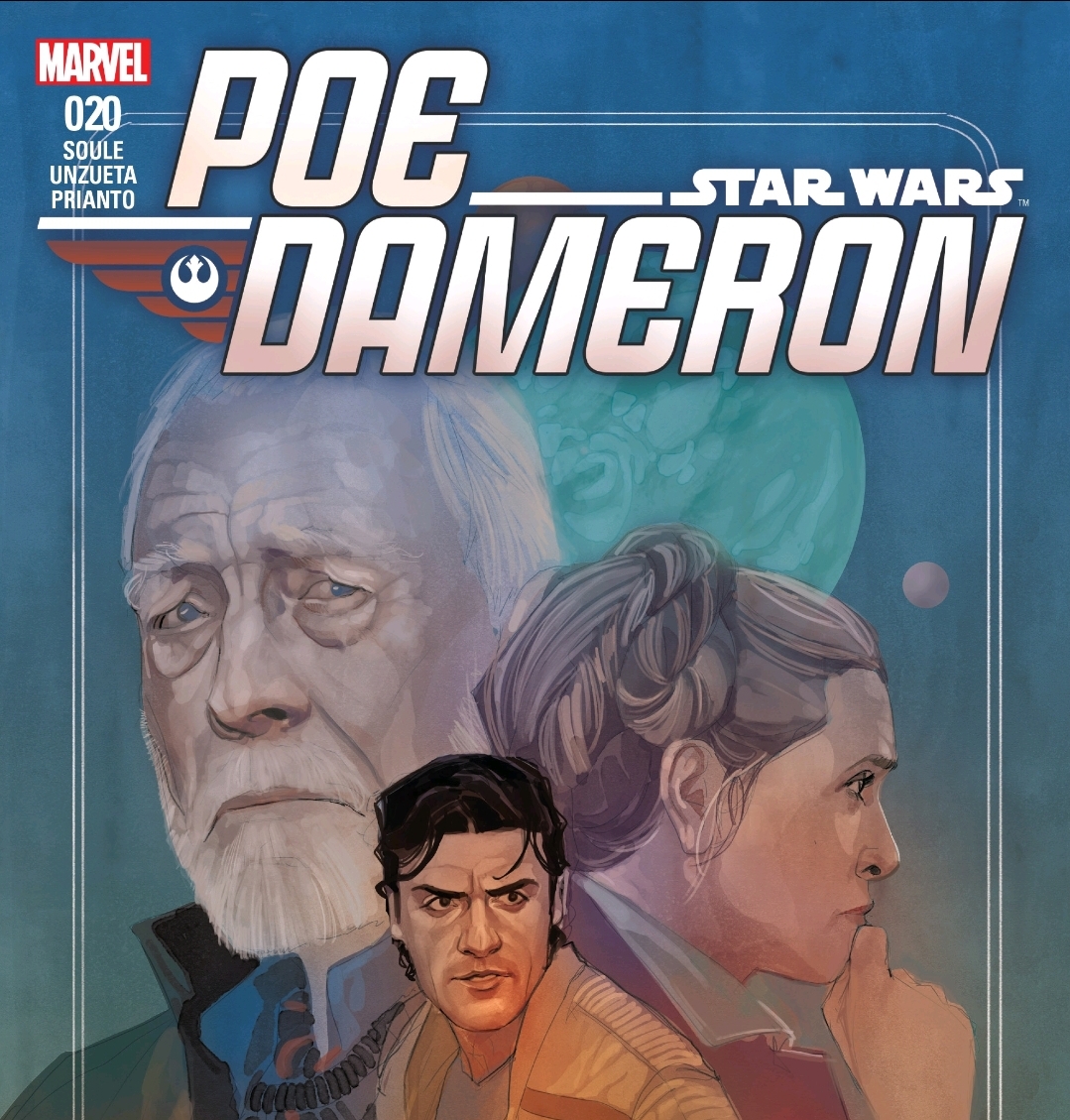