Ok so in part 1 I learned that building full armor takes a lot of cutting, sanding, glue, blood, and fingertips so here I continue to pay the price.

Our build group of Kevin, Michael, Leeanna, Stacey, Emii, and Cam was still going strong. After trimming out the pieces, sanding the edges clean, and losing track of how many days you’ve been in the shop you move onto sizing. Lots of blue tape held together armor tests to make sure the fit is right. Then we actually start gluing pieces together which is MUCH easier to do with some extra sets of hands.

By then I was beginning to see it come together. Things were finally starting to make sense and we were getting close.

After gluing our fingertips all over the inside of the armor and building the strapping and snaps to actually hold the armor in place we were there.

Lots of difficult things like the belt on this particular character takes time.

Then just like that, we were there. She test fitted it and we were set. 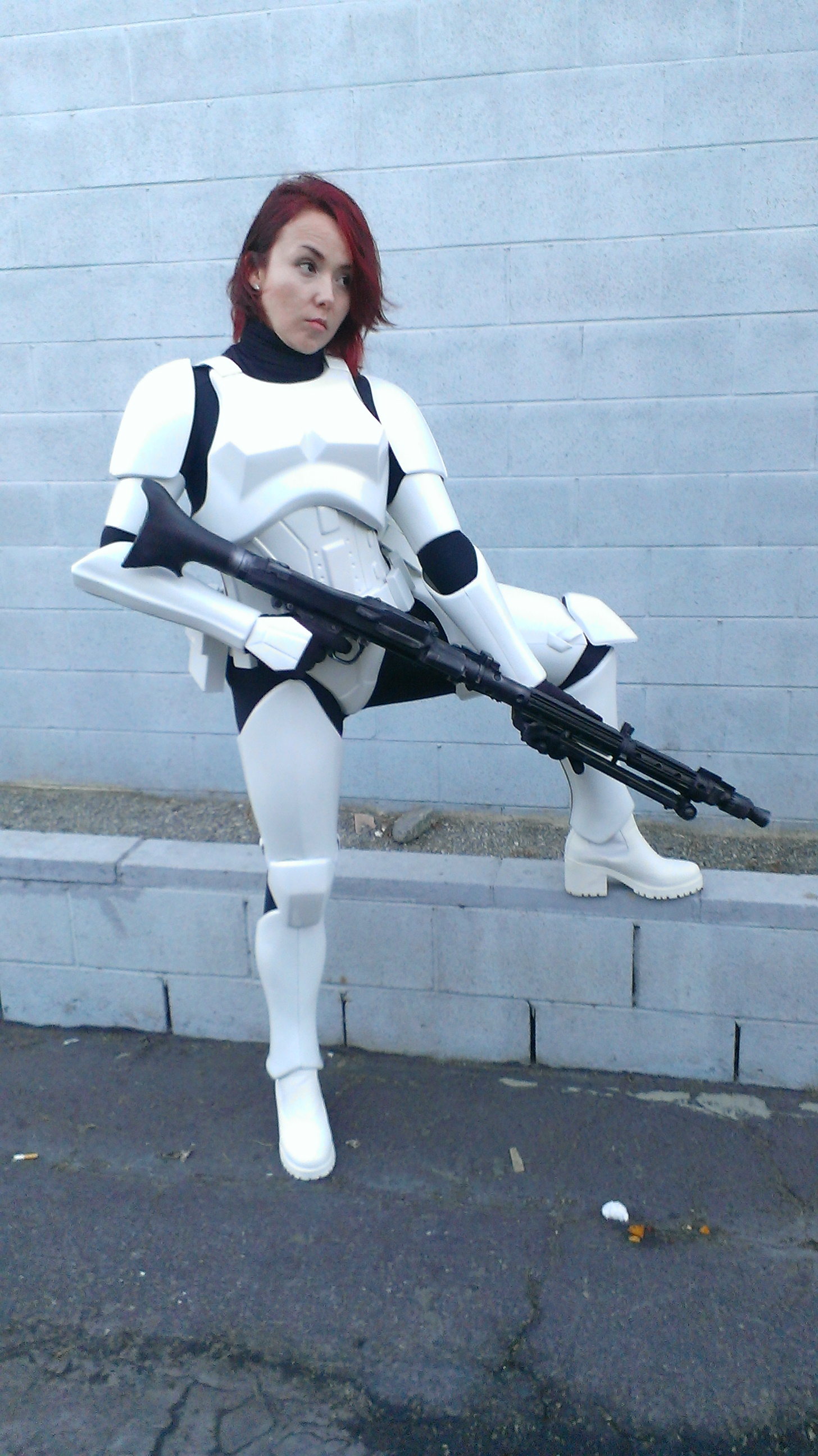 It was a crazy ride but we were ready for SDCC.

We got our hands on Kev’s DLT-19  and knew we needed the Hyperfirm blaster for ourselves. Hyperfirm blasters are a kind of rubber/foam mix or something that make a lightweight ultra durable blaster that comes perfectly weathered and looks and feels amazing to troop with.

All the girls were excited to be female stormtroopers but Liz wanted to BE Jes Gistang. So she dyed her hair red and got it put in cornrows. and we were off to the con.

The girls were set and Saturday morning made their debut at the 501st legion photo.

I found the silly pic. They’re waaaaaaay at the top!

The girls trooped hard all day and Liz and Emii got some great shots and hung with some great folks! And so did I!….

It was great to be a part of such a cool effort and we were totally glad that we were able to make Kevin’s debut memorable!

So after the rush and debut there was one more important piece to complete. The Helmet. Kevin finished it pretty soon after the debut and we started on the assembly. 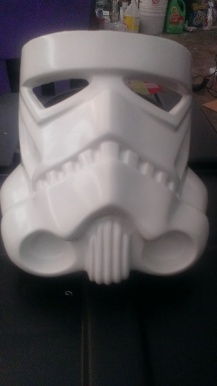 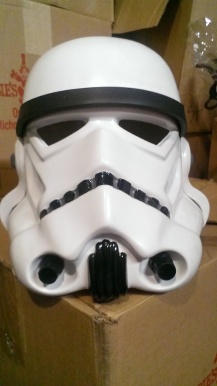 And with that the costume was complete.

we didn’t build this armor just for a con.

Liz was looking forward to joining the 501st with this costume and have another character to troop with. Unfortunately, we didn’t really know how much controversy this particular costume would cause.

Turns out getting this costume 501st approved was going to be an uphill battle. At the frontlines of the fight were Kevin and Bender. Lots of opinions on the statue reference vs the comic book reference. Lots of inclusion of all Legacy stormtroopers as a reference by those not realizing there are differences in the armor between the male and female versions. Lots of arguments concerning the differences between her back plate and detonator.

As an outsider, I was very confused as to why the fine detail differences were more important than adding another great option for 501st costuming. I guess some people were more interested in making sure the detonator details were flat and white like some of the comic book images instead of the buttons on the statue.

In any case thanks to Bender’s constant efforts finally the Legacy Stormtrooper (female) was approved.

So now that the door was open it was time for Liz to walk through and join the Legion.

She has had many troops since then and this armor has seen lots of love! 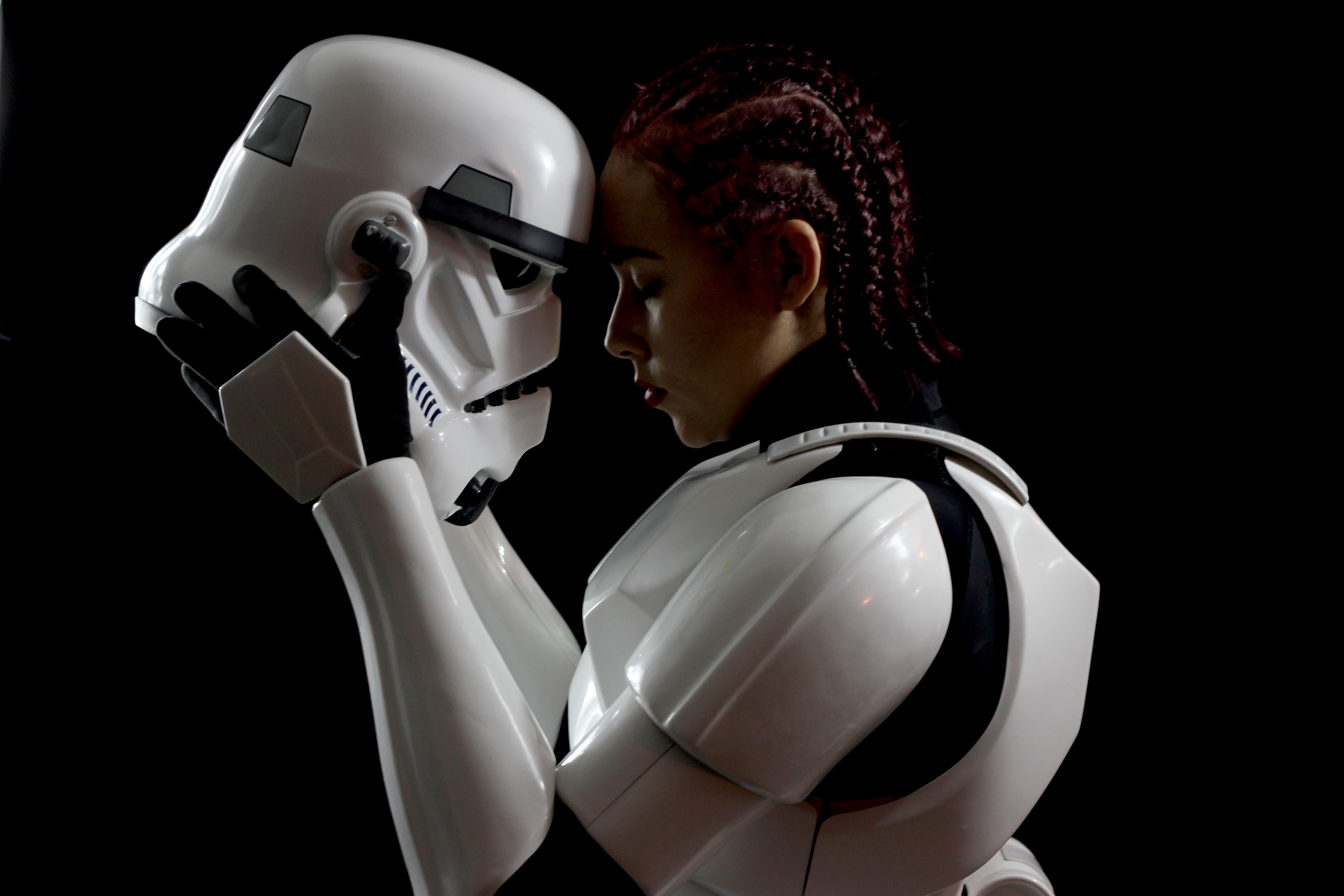 Catch up with us on Part V of #ObiWanKenobi before the finale!!
Happy Father’s Day to Sal and all the dads in the galaxy ✨ ⭐️
On ep. 125 of the Rogue Rebels Podcast, we talk Part IV of Obi-Wan Kenobi
#SeemsLegit
Yay! Go Angels 🎉🍾
Angels vs. Red Sox baseball ⚾️ #Ohtani 💕