One of the most beloved characters in Star Wars lore is Ahsoka Tano,

the young padawan of Anakin Skywalker who fought at his side through the Clone Wars and the young woman of action who eventually made her choice to split from the Jedi order and walk her own path. The mysterious Fulcrum who played an integral part in the formation and expansion of the fledgling Rebellion. Fans have watched her grow from The Clone Wars to Star Wars Rebels. This book from E.K. Johnston is a great look at her character in a medium that allows us to understand the character in a way only a book can.

As one of the most popular characters in Star Wars, there are a lot of questions surrounding her journey. Just to set the record straight, this book takes place about a year or so after the end of the Clone Wars. People looking for answers about Ahsoka’s fate after the “Twilight of the Apprentice” episode of Star Wars Rebels won’t be finding those answers here. The book touches on Ahsoka’s journey after Order 66 and follows her as she finds her place in this changing galaxy.

The book has its own sort of “interludes” every five chapters or so that flashback into Ahsoka’s past. These are really cool peeks into things we may have heard about through Dave Filoni at a panel or some unused concept art. While they aren’t huge narratives we do get little looks into the Siege of Mandalore, Ahsoka and Rex’s survival, and even perspectives of Kenobi and Anakin. I really loved these flashbacks and some even delved into other points of view than Ahsoka which were fascinating little windows into some very pivotal points in time.

For most of the book, Ahsoka is living under the guise of Ashla, a mechanic/pilot/whatever she needs to be to make her living without drawing too much attention to herself. It’s a neat little reference to not only the original names of the Force’s light side but also the name she almost ended up with during the production of The Clone Wars.

Some compared the feel of this book to A New Dawn, which was the story of a wayward Kanan Jarrus finding his path in this new galaxy. I do agree that the book has a similar feel of Ahsoka being misplaced and not having a very clear direction in this time, but I feel her story is very different. Ahsoka turned her back on the Jedi and decided to walk her own path. While she is no Jedi, she does have a very clear and strong moral center while Kanan survived by turning his back on many of the Jedi ideals and philosophies. When a problem arises Ahsoka cannot ignore it like Kanan could. Ahsoka is written very true to the character that we know very well from the Star Wars TV shows.

The story itself revolves around the difficulty in Ahsoka making these choices to help people with the possibility that doing so could actually put them in further danger. A Jedi on the run–even though she is one no longer–is a very dangerous thing in this new Imperial galaxy.

I like that many of the themes brought up in Ahsoka’s story are addressed here. Things like her discovery of a Force-sensitive youngling calls back to a few of the themes of The Clone Wars episode “Children of the Force” and the Rebels episode “The Future of the Force” that all deal with the Sith or Inquisitors taking those children to serve their own interests. It’s also something touched on in the Star Wars Rebels: Servants of the Empire series where it’s discovered that Project Harvester has something to do with finding certain children and brainwashing them to become something else.

Most of the story involves Ahsoka helping the residents of an Outer Rim moon who have fallen under the control of the Empire build their resistance and fight back. This is a great introduction to the themes that will change Ahsoka into the Rebel agent known as Fulcrum that we come to meet years later in Star Wars Rebels. The story has a great arc of someone trying to survive alone turn to help others and find her place in this new galaxy, not as a Jedi, but still something of a tool to unite those who would stand against the Dark Side. 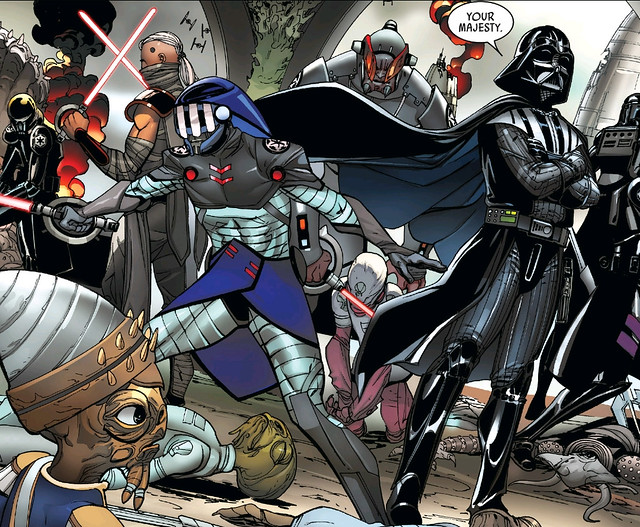 We also get our first chronological introduction into the Inquisitors. [EDIT: Now the Darth Vader comic series has become the introduction] Their mission remains the same as we see in Rebels but seeing them a bit sooner in the timeline is a very interesting piece of Ahsoka’s story.

I loved Ahsoka’s search for her new lightsaber crystals. It was unexpected but was done in a surprisingly cool way that teaches us a few things about the nature of Kyber crystals that we haven’t seen in canon yet.

The supporting characters in the story are well done. From simple farming folk, an industrious smuggling family, and a few familiar Rebel sympathizers, the people fill out the story well. I love the few cameos we get and even the flashbacks are wonderful reminders of those people who have affected Ahsoka’s story thus far.

The writing feels true to the character and the story is a wonderful look into such a chaotic time in her life. The relationship she forms and choices she makes feel authentic and make a great bridge from the young lady we see walk down those Jedi steps to the Rebel agent known as Fulcrum who pilots the Ghost at Mustafar.

This is a must-read for any Ahsoka fan and I definitely recommend it for anyone interested in the time between Revenge of the Sith and A New Hope and some of the events that bring the Rebellion together.

Wonderful characterization of a fan favorite and a great little adventure to link the stories we know together.

I thought I was done with the war, but maybe I don’t know how to do anything else,” – Ahsoka Tano