Some considered to be unnatural…. The fourth canon book from Del Rey gives us an action-packed, Force choking, crimson lightsaber blast of awesome. From Darth Vader to Darth Sidious and all the others caught in the wake of their power this book hits like a blast of Force lightning and really moves. While the previous three books (A New Dawn, Tarkin, and Heir to the Jedi) focus decidedly more on character this book tells a story that moves. That’s not to say that there isn’t a great amount of character insight in this book just as there is plenty of great Star Wars action in the other books. So how does it stack up? Is it worth your time and imperial credits?

The book opens with a wonderful insight into Vader’s solitary moments of meditation. This is a great introduction to the character at this time because it reminds us of who he was while at the same time showing us exactly who he’s become. While he retains memories of Anakin’s life he is very much another being.

An action sequence of Vader piloting his custom ETA-2 starfighter reminds us of his piloting prowess. It’s great to be reminded of these things and how they affect Vader in similar but separate ways than Anakin. At one point Vader boards the enemy cruiser… without a docking tube. It’s times like these that remind us that a huge part of both Anakin’s and Vader’s strengths came from their ingenuity. They are both terrifyingly focused on their goals and let nothing stop them from attaining them. In Anakin, it was a trait that made him a military genius able to come up with new unpredictable tactics. In Vader, it makes him an unstoppable force.

We then return to Ryloth. A wonderful planet that we’ve not seen since The Clone Wars. We also meet the resident Moff of the system Delian Mors. When she was touted as the first canon lesbian character I was actually afraid that her sexuality was going to somehow be made into a quirk or plot issue. I was very happy to see that her orientation was not treated like a hot button or character quirk to be added into the mix to appease some demographic. Mors actually turned out to be a fairly interesting and well fleshed out character. I was surprised to find that after reading the book she was definitely one of my favorites.

We also were reunited with Cham Syndulla. Another of the great characters that The Clone Wars gave us. The Twi’lek freedom fighter who fought alongside Mace Windu to save his people from Separatist occupation is every bit the principled leader he was in during the Clone Wars. It’s great to have a better insight into his thoughts in this novel. Cham is a well-written leader who fights both with and for his people. He’s a perfect foil for Orn Frey Taa who remains the spineless greedy pawn he always was…. One still wonders how Taa stays in power.

We also meet Belkor, an imperial officer whose ambitions take him into some very non-imperial places, and Isval, another part of the resistance who fights alongside Syndulla. The characters in this book are all very well written and interesting. It’s great to see such an interesting range of characters that all add something great into the story.

An elaborate ambush leaves Vader and Sidious stranded on Ryloth with no communications and the freedom fighters on their trail. There are lots of great parts from droid fighters and mines to bring down a Star Destroyer to an ambush of the comm station to knock out communications and deny the Sith the ability to call for reinforcements. Every part of the plan is one great action sequence after another. From the ship ambush to tracking the survivors through Ryloth’s jungle the pace of this story moves. While we never quite get the sense of the Darths being in any considerable danger we do get to enjoy all of the moments that come from the constant attacks.

Sidious in true Sith Lord fashion is wonderful in his cryptic words and actions. As if the entire chain of events is merely a test for his young apprentice. The interaction between the Siths is great and the fact that for the most part, we see it through Vader’s eyes. Vader’s relationship and questions about his master are strong story points and a great device for learning about Sith training. I also enjoyed Sidious’s use of the Sith language as a message and possible joke for his apprentice.

The only thing that I might nitpick is the fact that there are three supporting characters with B names: Belkor, Breehld, and Borkas. Super nitpicky and ultimately not an issue at all but it did have me flip back a few pages to make sure I knew which character was which. That’s how good this book was… that’s literally my only note….

This book knocks it out of the park. The action and character moments are great. Although we probably know the outcome before we even know the plot, much like the prequels, it’s the journey there that’s worth taking. Cham Syndulla is easily one of the best characters to come out of The Clone Wars and it’s good not only to see him again but to gain a deeper understanding of both his methods and his morals. I actually enjoyed Moff Mors’ story and am pleased with her arc. With so many of the Legends Imperial (or Imperial Remnant whatever…) characters sometimes being slightly less dimensional or defined by a single quirk  it’s great that so far many of the characters introduced into the canon universe outside of films and TV shows (Zaluna, Okadiah, Jovah, Aphra, Drusil, and Nakari….) are well thought out and compelling characters. I’m pretty jazzed to find that the books I’m least excited for so far are the ones that turn out to blow me away (I’m sure this will change with the forthcoming Dark Disciple… unless you’re reading this in the future in which case it will have already changed… trippy.) Great book so pick it up and gain a better understanding of the true nature of The Force!!

“The past is a ghost that haunts us. Ghosts must be banished.” – Darth Sidious 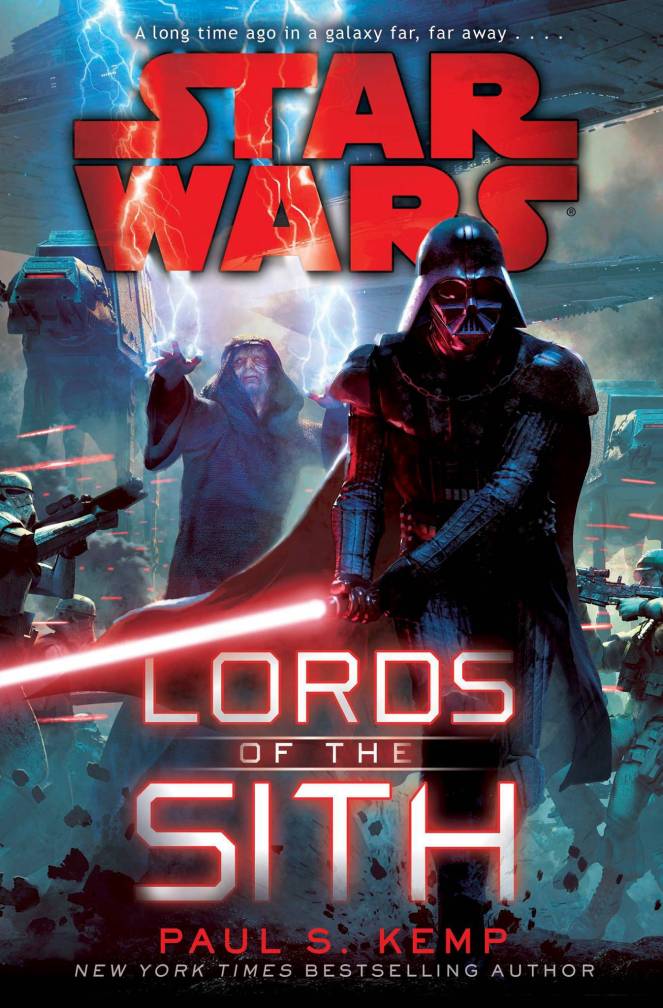 Lords of the Sith is available now on Amazon.com.

One thought on “Star Wars: Lords of the Sith Review!”